We are officially home owners again. Today we got the key to our new house. Yeah!

Now comes the last part: Cleaning, unloading, and unpacking. We already have a long list of people lined up to deliver and do stuff over the next few days.

We’ll post photos of how things are taking shape over the next few days.

We drove out into the desert hills east of Tucson yesterday. Right as the street changed from blacktop to dirt road, we drove by this property with a camel in the front yard. 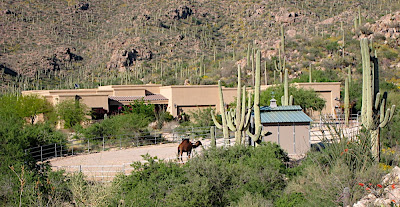 The farther up into the hills we got, the rougher the road became. Excellent opportunity for my RAV4 to show what it could do away from paved roads. 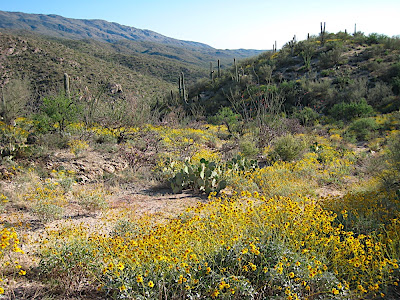 Today we ALMOST got our house–but not. Here’s our craptastic day!

Our lender and realtor team had assured us that they could get us closed and in our new house in two weeks, so we’ve driven to that. And it all came together smoothly. We were ready with days to spare.

We were scheduled to sign this morning and excitedly had all sorts of stuff lined up to happen just after closing and over the weekend: cleaning service, moving truck delivery, help unloading, handyman help, exterminator, appliances delivery, etc. We were super organized, locked and loaded, and everything was going smoothly.

Then the crap hit the fan. The seller’s agent had ONE (1) piece of paper to produce–a certification that the septic tank is in good shape. But we learned this morning that the agent’s assistant forgot to order the inspection!

We’re suddenly sitting around twiddling our thumbs while an inspector scurries out to take a look and produce the report. Can they can produce it in time to close today? We wait, stressed about whether it will happen in time for all of the dominoes to fall in place. Eventually it is too late to finalize things today.

Oh, but NOW the cert is ready. So we get to sign the docs today, but it may be late Monday before the seller is available to reschedule their signing. If that’s the case, it won’t record until Tuesday and we don’t get keys until probably Tuesday afternoon.

Despite our efforts and our planning, it all fell apart because one assistant forgot one thing. So we cursed, stomped and shook our fists at the gods of escrow for a few minutes then hustled to get everyone rescheduled.

A very frustrating and anti-climatic day. But then again, not so horrible in the bigger picture…a mere blip in our new life. Still, we just couldn’t get motivated to go out to console ourselves instead of to celebrate as we had planned. Thus, here we are sitting on the sofa at the rental, having a drink and sharing our craptastic day with our friends. 🙂

This post is long but a lot has happened in the last few weeks. Read the previous post from earlier today, then this one and you will then be up to speed on all that has been happening. There’s exciting developments!

Per the post below, a week ago today we’re looking for alternatives to the house on Palo Verde Vista due to the attitude of the sellers. But there are no new listings, so I comb back through what’s on the market. The only option is a house I saw early on that is just down the road from Palo Verde Vista. I didn’t show it to Alex initially since it is in a gated neighborhood, with an HOA, and in foreclosure. But the neighborhood is low-key so the gate is no big deal, the Palo Verde house also has an HOA and so the foreclosure is the main issue.

On Sunday, Alex and I look at the house on Sunset Road together. I remember how much I love it and Alex really likes it too. It is a brand new custom-built house on 3.3 acres. A contractor and his wife built it for themselves then ran out of money and lost it to the bank.

But we are only 3 days away from having to make a final commitment on the earnest money on Palo Verde Vista. Do we dare cancel that deal to pursue this one? How long would it take the bank to respond to an offer? What if they won’t budge much on the price? What if something big turns up during the inspection that is a dealbreaker? And interest rates have risen sharply.

But we are excited about the house on Sunset Road. Palo Verde Vista is a great deal ($446k/$128 per sf), big (3480sf) and with dramatic views, but it was the result of a process of elimination against a logical checklist. And needs a lot of work (and money) to make it feel like us.

The asking price on Sunset Road is much higher ($528,500/$181 per sf); the house is much smaller (2919sf) and it has great but slightly less dramatic views. But it feels like us and is more a matter of love than logic for us.

When the sellers finally get back to us two days late, we ask to have until Friday to commit or cancel. We hire an inspector to inspect the property ASAP so we can have this info before making a final decision. When it reveals nothing big, we make an offer of $465k late Wednesday night. We think $485k is a good price but we’re willing to go higher if necessary. So we take the plunge and cancel the first deal even if it means it takes longer to get into our house.

Amazingly, one business day later on Friday at 8am, we receive a counter offer from the bank for $485k–exactly our target price! With a foreclosure, if a second offer comes in before the house is under contract, the bank asks all parties to submit their highest offer which drives up the price. Since it was Friday and the bank had already come down to our target price, we decided not to risk another offer coming in over the weekend and accepted their offer!

So, we’re now under contract on a much nicer house on a much bigger lot in a neighborhood that we like even better than the first! And since our house in Fremont closed escrow on Friday (yeah!!!), we should be able to close escrow on Sunset Road by or before the end of April. It would have been mid-May with Palo Verde since it had to be painted and carpet replaced. Yes, we hated to give up the big game room at Palo Verde but we’re that’s a sacrifice we’re willing to make. And we’re getting our earnest money back tomorrow, so all is well.

So, check out our new house!! Click here to see photos. There will be a dedicated guest room so you’re welcome to check it out firsthand!

A little about the neighborhood: It is 16 large lots on two streets. There are 4 lots on our street but our house is at the end of the road and the only house on the street so far. There are 12 lots on the other street with 4 houses built so far. At 2919sf, ours will likely be the smallest house in the neighborhood since houses must be a minimum of 2900sf. The neighborhood was developed by 4 Raytheon engineers, each purchasing 4 lots–one for themselves and 3 more to resell. So far, we’ve got 3 engineers and a doctor on the other street with the 4th engineer about to build a 7000sf house. Thankfully we don’t feel the need to keep up with the neighbors and everyone we’ve met there seems really friendly. We can’t wait to move in!

It’s been a couple of weeks since we’ve posted to the blog. Not because there’s been nothing going on but because there has been a lot of drama and we didn’t want to post anything publicly that might come back to bite us. What’s below brings you current to a week ago:

First, there are issues with the appraisal of the California house. The initial appraisal is lower than 30 of our 34 offers. This means that the buyer has to bring more cash to the table to supplement the mortgage loan, which makes the buyer nervous about the deal. We had made it a condition that the buyer wouldn’t negotiate the sale price down if the appraisal was less. Since the appraisal seemed rushed and unrealistic to us, our Realtor approaches the buyer about changing lenders in order to get a new appraisal. The second appraiser spends much more time researching and delivers an appraisal that is in line with what everyone expects. So the deal is on.

Just as we relax, Schwarzenegger announces the new $10K state housing credit that goes into effect on May 1st. The buyer starts talking about pushing out close of escrow until after May 1st and making that a condition of the sale. We say that we can’t do that because of our mortgage rate lock and escrow here. She then offers to pay to extend the mortgage rate lock and pushes for us to delay. When we detail additional expenses involved in delaying (rental housing, furniture storage, mortgage costs, utilities, etc.) the seller decides that a delay doesn’t sound so attractive after all and one more problem is averted.

Meanwhile, in Tucson, I have my Realtor contact the sellers of Palo Verde Vista to ask that they allow me one day during escrow to bring in a few contractors to see the house. The idea is to get estimates so that work could start right after close of escrow, allowing us to finish and move in sooner. It takes four calls by our Realtor to get a response and the response is ‘no’, don’t bother us until escrow. Their Realtor phones ours to say that the sellers are freaking out and feeling overwhelmed. They are an older couple with a house stuffed with things to move. So I withdraw my request, and we offer to give them a few extra days to close escrow. We even offer to spend one day helping them pack and load/unload stuff. So surely that will buy us some goodwill.

But when we submit a few items from the inspection report (not nearly everything in the report), they miss their deadline to respond within 5 days with no apologies or concern. So no warm fuzzies or cooperation from the current owners. We hear that it is the wife that is hostile about moving. So we decide it was time to at least consider alternatives. The problem is that NO new houses fitting our already-broadened criteria have been listed in the three weeks since we made the offer. So, what to do. Ah, the adventure!